Worms and worm-like micro-organisms are some of the oldest living creatures on the planet. So it’s no wonder scientists often observe worms under a microscope. It has always been fascinating to look into the intricate details of organisms that lived millions of years in this world. Over time, worms have evolved into distinct organisms.

Studies about ancient worms in fossils revealed that they have features still present in their modern-day descendants. For instance, the fossilized bristle worm found in British Columbia in 2018 is believed to have lived 500 million years ago. It has tiny hairs made for swimming and tube-like palps that work as sensory organs. They are considered the ancestors of leeches and earthworms.

One of the first studies about worms was done by Antoni van Leeuwenhoek in 1674. He used a microscope and discovered tiny creatures living in the water. He believed that these creatures were essential to explaining why there is mud and slime on earth. Later, scientists associated his observations with roundworms and parasitic worms.

MIT Professor Phillip Sharp and his colleagues determined that worms reproduce by growing their sperm. It allowed them to penetrate the outer cells of a female worm, which attaches itself to the uterus.

Also, Charles Darwin, who studied worms during his travels, was one of the first scientists to conclude that earthworms are beneficial for human beings. They left behind nutrient-rich soil, which benefits plants and flowers. In addition, they help aerate the ground through their tunneling activities.
Embed from Getty Images

Worms are soft-bodied invertebrates that live on the earth’s surface, in water or soil. They range from microscopic bacteria to several feet in length. These oganisms come in many different colors and shapes. Some can even change their body color to lure prey, while others camouflage themselves to protect themselves against predators.

Worms are essentially legless and move by creeping using specific muscles, but organisms with the hair-like structure that helps their movement.

Worms can be found in a variety of locations throughout the world. While earthworms may be found in many wet terrestrial settings (in the dirt or decaying organic debris), Polychaetes are common in marine environments.

While some types of tubeworms (Riftia Pachyptila) dwell on the seafloor and form a beneficial symbiosis with sulfur bacteria, other worms may be parasites that live in plants, animals, and even in the human body.

Many types of worms exist in the world today. For instance, leeches, tapeworms, and roundworms are three common worm families. However, there are other types of worms that live in unique environments.

Objectives of the Experiment

It is always an exciting experiment to discover the unique structures of this creepy crawlies under an electron microscope. It is also an exciting task to observe how worms move when placed under a microscope.

A worm under a microscope may be used to compare one type of flatworm, roundworm, and segmented worm to another. It will also allow researchers to identify specific similarities and distinctions between these worms.

With such experiments, students will learn the following skills:

Using a magnifying glass to examine the worm before viewing it under a microscope is always advised. It will give the student a broad view of what the specimen looks like.

Because a magnifying glass has lower magnification power than a microscope, it may be used to magnify the image many times to get an overall sense of the morphology. 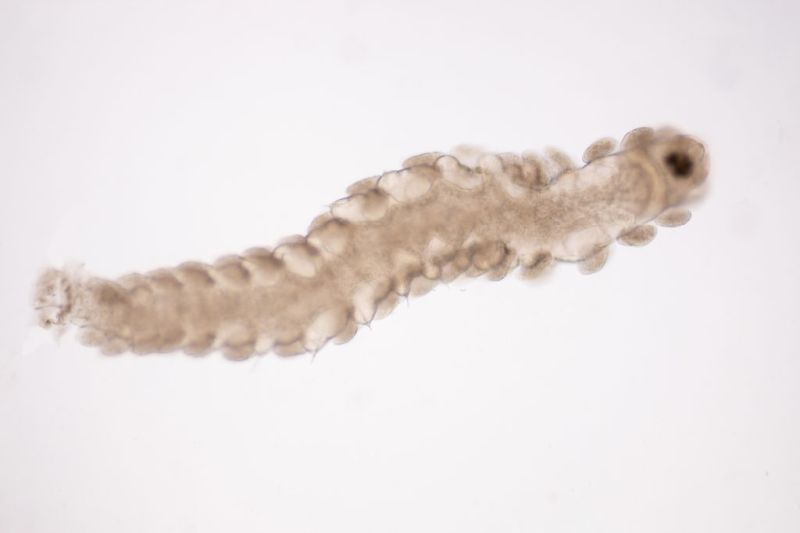 Preparing for the Experiment

You may use prepared slides of worms or place your specimens directly in your slides. The latter will give you better results because you can adjust the electron microscope set to get more detailed images of your subject. You can also choose to light your worm specimen using a dark field or bright field.

The following are materials you will need to prepare for this experiment:

Since eelworms are so tiny (0.4-1.2 mm) that they can be challenging to spot with the naked eye, collecting them might be tricky. However, the worms may be found by recognizing an infected crop, such as tomatoes or rhubarb, potatoes, etc.

The following technique may be used to collect eelworms:

Observing Worms Under a Magnifying Glass

Segments on the skin along the worm’s whole length will be visible under a magnifying glass, revealing its complex structure. These dividers enable the creature to flex and twist at will. If you have access to proper lighting, you may discern the worm’s internal organs (e.g., vessels) under it. On the other hand, some species might have a darker epidermis, making it difficult to identify anything.

The head at the front of the body is tiny and pointed (smaller than other segments). In the middle of the body, you will notice a distinct area that appears swollen and lighter in color than different sections. The clitellum is a segment near the midsection of the body that plays a role in reproduction.

You may also observe the setae, hair-like structures on the segments and skin, and the earthworm’s cylindrical body using a magnifying glass.

Flatworms have an elongated body but are significantly smaller (3 to 15mm) than earthworms with a flattened body (leaf-like). They are usually colorless but may have some pigmentation, so it is difficult to observe the belly. However, you will be able to notice its triangular or leaf-like anterior sections under a magnifying glass.

The posterior end (tail) is more pointed than the anterior part (wide). Eyespots may also be seen near the head region and a pharynx positioned in the middle of the body (central portion of the body).

Compared to Earthworms and Flatworms, eelworms are notably smaller in form. They are also cylindrical-shaped, but the abdomen is distinguishable. In addition, eelworms aren’t segmented, unlike worm species that may be observed under a magnifying glass.

It would be impossible to tell one part of the body from another under a magnifying lens. They may, however, be observed moving in a group.

The Earthworm Under The Microscope

With an electron microscope, you’ll be able to see both the outside skin and internal (through dissection) anatomy of the earthworm.

You will need the following for this experiment:

Apart from an electron microscope, a stereo microscope can be used to observe the external anatomy and the earthworm. For this experiment, the procedure is as follows:

To observe the behavior of a live earthworm, repeat these procedures and watch how the body and mouthparts move.

Observations on the Earthworm

A fleshy bump can be seen at the front of the worm under higher magnifying power. It is known as the prostomium, and it surrounds the worm’s mouth area. The anus is located at the rear end of the worm. A septum may be visible between individual small body segments under a microscope.

The worm’s ventral aspect (which is rounded and darker) is flatter than the dorsal side (which is pointed and paler). The setae (minute hair-like bristles) and pores (pores on each body segment) may also be seen. Aside from the pores on the body regions, you should also acquire a good view of larger pores (genital pores) near the worm’s front end.

To further study the worm’s internal anatomy, you need to dissect it for another observation under the microscope.

The requirements for dissection include:

The internal anatomy of the earthworm may be seen in detail as you examine it. It will showcase clear images of the head and skin surfaces.

You will be able to see the following:

The Flatworm Under the Microscope

For observing the flatworm, you need to prepare the following materials.

The procedure for observing live flatworms will be as follows:

Before carefully pressing the coverslip against the flatworm, a little bit of vaseline should be applied to the edge of it. Be careful not to crush the specimen.

Observing the Flatworm Under the Microscope 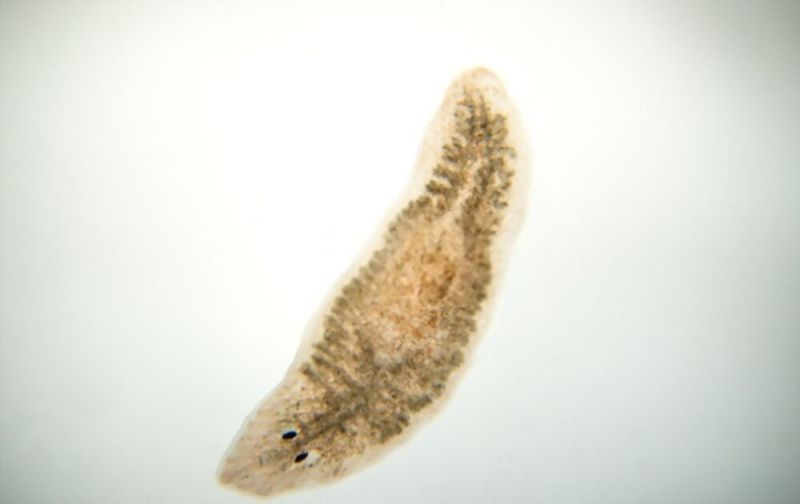 After preparing the slide, the next step is to observe the flatworm. The procedure will be as follows:

If you look at a flatworm, you’ll notice that it is flattened (resembling a flat-leaf plant). The eyespots are near the head area (anterior portion of the worm) may also be seen. These colored cuts are sensitive to sunlight and serve as eyes.

The head may have a pointed profile on the sides, depending on the species. Auricles are these points, which serve as sensitive sensory organs for smell and touch. It’s also feasible to detect the pharynx that feeds in the midsection.

The Eelworms Under the Microscope

Compared to earthworms and flatworms, eelworms are significantly tinier in form. Therefore, you may need a culture media to grow them first before inspecting.

To culture eelworms, you will need the following materials:

Observing the Roundworm (Eelworm) Under the Microscope

To start observing the eelworm, you have to prepare the following materials.

If a worm is found, it will be translucent like the epidermis of an earthworm. The eelworm will be cylindric (tube-like) with a pointed posterior compared to the flatworm’s body.

The body posterior may be observed through higher magnification. The mouth and esophageal bulb is seen at its anterior, with an intestine running from there to the animal’s rear.

The reproductive organs are also visible, usually at the end of the worm.

Many different types of worms may be found throughout the world. Some exist in a free-living state while others are considered parasites and creepy crawlies.

It’s also beneficial to collect a wide range of bacteria and organisms from your area (or even order them online) and compare their anatomical features in an attempt to discover how they survive in their unique settings.

But what’s more important is that you can quickly learn about these creatures by using a microscope. Observing the worms (and other living things) may prove to be challenging, but it will be worthwhile once you discover exciting features of their anatomy and habits under the microscope.