If you are an avid microscope explorer, you want to observe the rarest and most special organisms seen through a microscope. Why do we suggest the Volvox as your next specimen? Observing Volvox under the microscope is an exciting experience for youngsters and enthusiasts.

Volvox is a genus of green algae in the family Vovlocacae that forms a spherical colony with over 50,000 cells. The species may be found in freshwater environments such as ponds, puddles, ditches, and other bodies of water. Additionally, Volvox can reach 500 micrometers in diameter, making it possible to view them with the naked eye when wholly developed.

It is challenging to understand the life of tiny organisms such as these algae. They are microscopic, but they have a significant impact on our world. This article will teach you how to observe Volvox under the microscope and help you understand their lifecycle and how they survive in different environments.

Volvox is a Chlorophyte, or green alga. It takes the form of a large spherical colony. Each tiny alga in the colony has two flagella, whip-like hairs that whip around. The colony is kept together by slender cytoplasmic strands that allow it to swim in unison. Small red eyespots enable the colony to turn toward the light.

The Volvox colonies have what we may describe as a head and rear end. Or, because Volvox looks like a small planet, a ‘north and south pole.’ In the northern part of the colony, the eyespots are more prominent. This aids in the swimming movement of the colony towards the light. Because there is this distinction between cells in the northern and southern parts of the colony, we can call it the north-swimming type.

It is suggested that this structure evolved to optimize swimming toward sunlight while avoiding dust clouds (which might be harmful). The body shape also protects from predators – even if a single cell in Volvox were to get eaten by a predator.

When and Where was Volvox First Discovered?

Volvox was first discovered by Antonie van Leeuwenhoek in 1675. At that time, he became intrigued with the tiny organisms he saw swimming around under his microscope. He later described these as a “little world within a world.”

Van Leeuwenhoek submitted a letter to the Royal Society of London in 1700 about parasitic worms and gnats in sheep livers and frog feces and excrements. The Volvox is described in this letter to the Royal Society of London. He wrote that they were “a breathtaking sight” and that “at both sides of them, perceived several finely proportioned globules were swimming very nimbly with an as great velocity almost directly backward.”

Swedish scientist Carl Linnaeus also gave Volvox the nickname “fierce roller” due to its behavior. Linnaeus is credited for creating the binomial nomenclature, a system for denoting organisms by species. He classified Volvox under the Zoophyta within class Vermes. It is in the same class as Bryozoa, Rotifera, and Turbellaria.

Volvox is a colonial green alga. Each cell in the colony has two flagella that are used for swimming. The cells are arranged in double rows outside a hollow sphere. There is usually one large cell in the center of the sphere that functions as an egg cell. Each part of the structure is discussed below:

What are the Most Common Types of Volvox?

There are many different types of Volvox, but some of the most common include:

Volvox has been used for millennia as model organisms for their reproductive capabilities and rapidity. The cellular colony behavior is believed to be how unicellular creatures evolved into multicellular beings. These are just four of the 20 species of Volvox now recognized. Many of the species remain little investigated.

How Does Volvox Thrive and Survive?

Volvox can be found in shallow and deep ponds, lagoons, puddles, ditches, swales, and similar locations. They tend to thrive in regions that receive a lot of rainfall. They reside within nutrient-rich water because it is more convenient for them. Volvox may be found in pond scum. If you squeeze out the water from a handful of pond scum and examine it, you’ll probably see Volvox swimming towards the light.

It’s a type of hormone that can cause sex or reproduce asexually. The pheromone is mainly released due to heat shock, which is helped along by oxidative stress. The stress may harm the DNA of the Volvox. The sex-inducing pheromone is believed to have aided the Volvox in surviving lengthy droughts and extreme heat by providing a stimulus for reproduction. Finally, if the Volvox is wounded, it might release a pheromone.

Volvox colonies are made up of somatic and gonidium cells. The vegetative somatic cells are immobile and useless in terms of reproduction. Despite their lack of capability to procreate, somatic cells are mobile and contribute a function all their own. The gonidia, on the other hand, are immobile. They play an essential role in generating new colonies by dividing rapidly and repeatedly.

Is Volvox Harmful to Humans?

Volvox organisms are not hazardous to humans. They are too tiny to cause any damage and do not possess any weapons or poisons that might harm us. On the other hand, Volvox CAN create algal blooms that can harm an ecosystem. Algal blooms may be responsible for the deaths of fish, birds, and other aquatic animals. Because Volvox prefers to live in mineral-rich environments, they may grow rapidly and plentifully along with other algae at times, causing damage.

How to Observe Volvox Under Microscope? 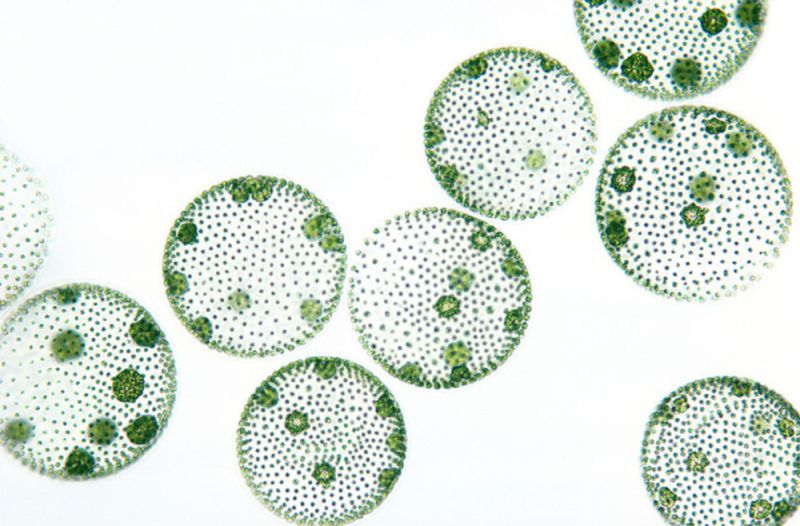 Volvox is quite common. If you scrape algae off the top of a pond or the shoreline of a lake, Volvox is likely to be present in the sample. Because Volvox moves slowly, they may be observed at extremely high magnifications.

The north side of the Volvox can be observed at 600X and above. The flagella and the motion that allows them to move circularly may be seen if you close your iris diaphragm more than usual at high magnification. It is possible to see the individual cells that make up the Volvox at this magnification.

The south side of the Volvox, on the other hand, cannot be observed as well because it is convex. The south side contains the gonads that are used for reproduction. The south side may be examined at lower magnifications, such as 400X.

Because of their spherical shape, obtaining a comprehensive image of the cell may be difficult unless you have some excellent flat-field corrected objective lenses. If you’ve never seen Volvox under a microscope before, looking for these tiny organisms is quite fascinating to observe in action.

Which Microscope to Use?

To observe Volvox in detail, you will need to use a bright field or darkfield condenser and an objective lens with a high numerical aperture number. It will provide the most precise images of the Volvox organism. It is unnecessary to use phase-contrast optics because the cells are so small that they do not have any substructure.

You can find Volvox at any body of water or lake that has freshwater. Because they are so familiar and accessible, it is easy to find suitable samples for your microscope once you understand what you’re looking for. With some time and practice, you will be able to identify them with impressive accuracy.

Volvox is tiny, spherical organisms that move in a complex and fascinating manner. They can be observed under a microscope with some practice and the right tools. Observing Volvox can help you learn more about these unique aquatic organisms and their role in various ecosystems. Whether you’re a scientist or simply an enthusiast of microscopic life, studying Volvox is a great way to spend some time!