Microscopy enthusiasts can find plenty of exciting specimens to explore in a drop of water. One such specimen is Spirogyra, a type of green algae. This thread-like genus of green alga is a fantastic specie to observe under the microscope.

Spirogyra is stunning to look at under a microscope, and their characteristics, structure, and categorization might help you appreciate them even more. In this article, we’ll look at what Spirogyra is, how it’s classified, and where it can be found.

Spirogyra is commonly found in freshwater environments like ponds and lakes. They’re often referred to as “pond scum” because of their slimy texture and their tendency to float on the water’s surface. Other complimentary terms used to refer to Spirogyra are mermaid’s tresses and water silk.

Spirogyra is filamentous algae, meaning that they’re made up of long, thin strands of cells. These cells are joined end-to-end in long chains, which allows the algae to grow into tangled mats or clumps.

While Spirogyra is not a particularly common type of algae, they have some exciting characteristics that make them an intriguing subject for microscope observation. Some key features of Spirogyra include their ability to reproduce through mitosis and meiosis.

Under the microscope, Spirogyra’s beauty is evident in its tubular cells, which contain helices of vivid green chloroplasts that spiral their length.

The Structure of the Spirogyra 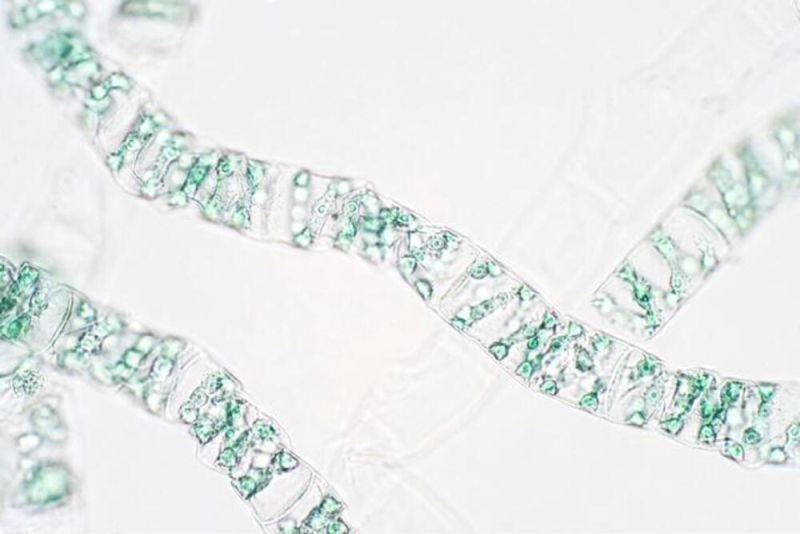 The spirogyra structure may be broken down into various parts.

What Are the Types of Spirogyra?

Where Do Spirogyra Live?

Spirogyras can be found in freshwater settings like shallow ponds, ditches, and lakeshores. They are frequently free-floating and may be found in large clusters of other Spirogyra.

Spirogyras are one-of-a-kind since they are short-lived and most numerous during rainy seasons. They dry up quickly. Spirogyras prefer eutrophic water sources. Eutrophic water bodies are defined by waters that are increasingly mineral and nutrient-rich. Because of this, the water is commonly quite transparent. Eutrophication can cause algal blooms, dead zones, and fish kills in the long term. Tiny filaments begin to develop in generally stagnant water during the wet season.

Spirogyra is most often found in acidic ponds, lakes, or slow-moving streams and estuaries. Spirogyras begin life underwater before emerging to the surface. They produce more oxygen as they mature and grow to the top, after which they fall into mats and rapidly dry up.

How Do Spirogyra Reproduce? 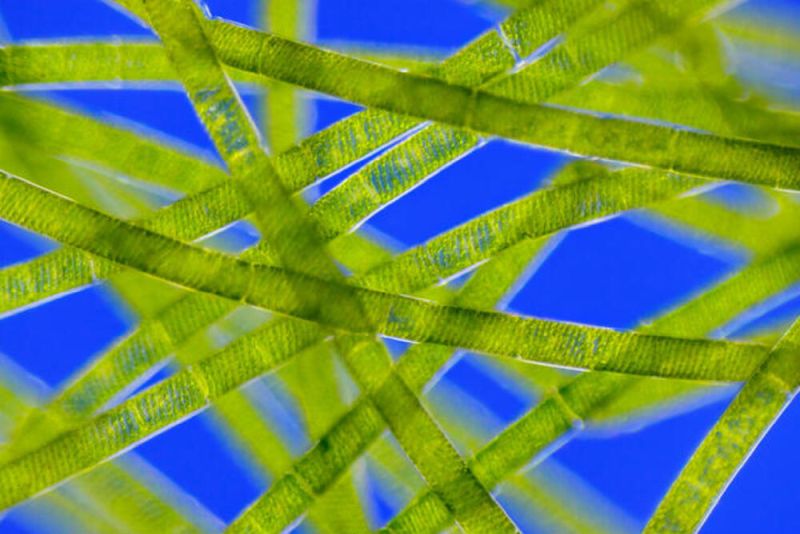 Spirogyras may reproduce in three ways: vegetatively, asexually, and sexually. Vegetative reproduction is achieved by fragmentation. Asexual spores are produced via three distinct asexual zygospores. The zygospore is the sexual reproductive cell of Spirogyra that conjugates with another individual to form an offspring.

The most systematic manner by which a Spirogyra reproduces is through fragmentation. Each piece becomes an adult Spirogyra with the same DNA as its parent. It is caused by any mechanical damage to the parent Spirogyra. Even the death of a Spirogyra can result in fragmentation.

It is also much less typical. It happens only in the rare event that the Spirogyra lacks other options for obtaining nutrients or does not have any surrounding Spirogyras with which to reproduce sexually. Three types of spores play a role in asexual reproduction:

The zygospore is formed during favorable circumstances. Sexual reproduction occurs through the formation of the zygospore. Conjugation is the fusion of two gametes generated by two separate Spirogyra. The male gamete is mobile while the female egg is immobile.

Spirogyra can reproduce in two different ways: scalariform, which happens when two Spirogyra cells come into contact and pull together in a similar shape, and metamerism, which occurs after the cells separate. A papilla reaches across from one Spirogyra to the other while the second Spirogyra forms a conjugation tube.

What Is the Energy Source of Spirogyra?

Spirogyra may not consume in the same manner as other pond algae. Instead, it uses photosynthesis to transform light energy into usable chemical energy. Photosynthesis can be divided into two categories: oxygenic and anoxygenic. Oxygenic photosynthesis is the most frequent form of Spirogyra.

The energy in light is transferred to carbon dioxide during oxygenic photosynthesis. It acquires energized electrons. It generates carbohydrates (sugars) or other sugars as a result. As shown above, the carbon dioxide is reduced, and the water is oxidized during this process. As a result, oxygen is produced and released.

The reduction and oxidation process is crucial for maintaining a healthy balance of oxygen and carbon dioxide in our atmosphere. The atmosphere would be excessively concentrated with carbon dioxide and possibly too poisonous to breathe if photosynthetic organisms were not there to perform this function.

Spirogyras have particular cell types known as stomata that open and shut. These stomata aid in the uptake of carbon dioxide, which is required in the chemical transformation process. Stomata are also involved with the release of oxygen into the environment. Chlorophyll is responsible for absorbing usable light and reflecting all colors except green, which is why Spirogyra has a distinct green color.

The production of ATP and NADPH is aided by chlorophyll, which activates the reaction. The most basic biosynthetic processes in the stroma are directed using ATP and NADPH. During these procedures, water molecules are broken down, resulting in oxygen being released into the environment.

How to Observe Spirogyra Under Microscope? 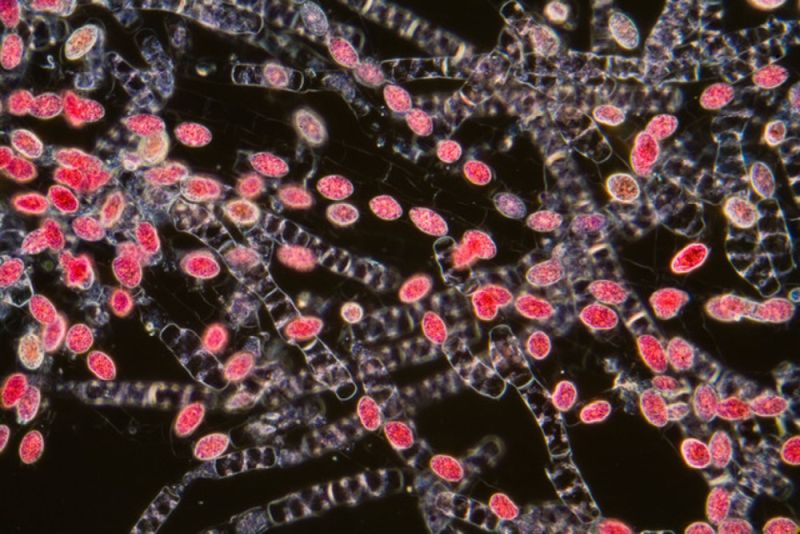 The unique structure and energy source of Spirogyra make it a fascinating organism to observe under the microscope. Whether you are studying biology, ecology, or environmental sciences, this microscopic alga provides valuable insights into photosynthesis and life in the pond ecosystem. If you are interested in observing Spirogyra under the microscope, here are a few tips.

To observe Spirogyra under the microscope, you need a high-quality compound light microscope with at least 40x magnification. You can use any mounting media to prepare your samples for viewing, but we recommend using a drop of pond water or sterile saline solution.

Once you have your microscope and sample prepared, begin by locating a Spirogyra filament in your sample. If you use pond water, you may need to adjust the light intensity and focus to see the filament. Once

you have located a filament. Carefully adjust the focus and light intensity until it is in the direction and visible.

To study Spirogyra more closely under the microscope, use a low magnification to get an overview of its general structure. Then use higher magnifications to examine specific features like cell shape, chloroplasts, stomata, and the central vacuole.

Spirogyra can reach several centimeters in length, visible to the naked eye. It is ideal to cut it to a reasonable size to ensure it does not extend beyond the slide coverslips. Spirogyra can clump together, and single strands can be difficult to obtain, so use tweezers and take the smallest piece feasible. Spirogyra’s helical-shaped chloroplasts may be seen at magnifications of around 100X because they are reasonably big compared to other microorganisms.

What is the Best Microscope to Use in Observing Spirogyra?

There are a variety of microscopes available on the market, and choosing the right one for your needs can be overwhelming. However, when observing Spirogyra under the microscope, we recommend using a compound light microscope with at least 40x magnification.

While more powerful microscopes are available, such as electron microscopes, they are not necessary to observe Spirogyra. Compound light microscopes provide a clear view of this microscopic alga while also being more affordable and user-friendly.

No matter which microscope you use, carefully adjust the focus and light intensity until the Spirogyra filament is in the direction and visible. Once you have located a filament, you can use lower magnifications to get an overview of its general structure and then use higher magnifications to examine specific features.

Spirogyra is a fascinating green alga that plays a vital role in photosynthesis and the ecosystem of ponds and lakes. They are not as exciting as other microorganisms moving around, eating, and conjugating, but you will be amazed at the beautiful details you can observe with a high-quality microscope. There is an intricate artwork in natural chloroplast patterns made famous by the Spirogyra.

It is easy to find Spirogyra samples from nearby lakes or ponds. They are visible to the naked eye, so you can see them floating around. To study this microorganism under the microscope, we recommend using a high-quality compound light microscope with at least 40x magnification. With proper care and attention to detail, you can explore the structure of Spirogyra and its unique features like helical-shaped chloroplasts, cell shape, and stomata. Whether you are a student or researcher interested in Spirogyra, this guide will help you get started with your observations!