Skip to content
Home » Microscopy » Observing Sand Under The Microscope

Sand is one of the many fascinating materials to view under a microscope, given its distinct shapes, sizes, colors, textures, and the fact that how the sand looks is highly dependent on where it comes from.

This is because the composition of sand depends on the local environmental conditions, and more importantly, the available rock sources where the sand comes from. For example, inland sand is usually made of quartz and silica, while sea sand is made of calcium carbonate.

Contents show
What is sand?
How to view sand under the microscope
What you can see
Size and shape
Composition
What are the different types of sand?
Volcanic sea sand
Magnetic sea sand
Shell sea sand
Coral sea sand
Lake sand
Construction sand
Overview

Sand is defined as a granular material that is made up of fine mineral and rock particles which are smaller in size than gravel, but coarser than silt. It’s also a term that is used to define a type of soil, aptly called sandy soil, in which the soil composition is about 85% sand.

Sand is generally a byproduct of weathering, such as through erosion of rocks made by wind and water. However, sand can also be mined and artificially produced.

As you can see here, sand comes in a wide variety of colors, shapes, and sizes. This depends on where the sand comes from and what it’s made of. Included in this image are quartz sand, dune sand, garnet sand, coral sand, olivine sand, and more. 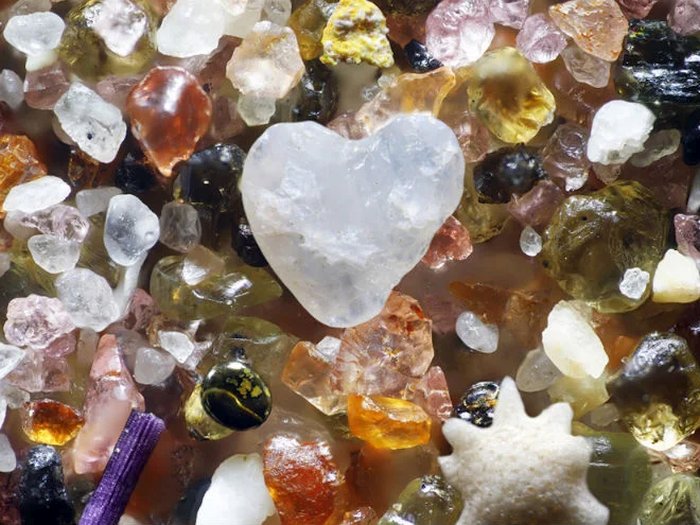 How to view sand under the microscope

If you are using a stereo microscope, the best strategy is to illuminate the specimen from the side by using a bright flashlight or other light source. This will cast shadows and better define the details of the specimen.

Otherwise, use the flashlight to illuminate the specimen from above (do not use the microscope’s illuminator). Moreover, make use of both black and white sheets of paper as your background, and see which one makes the sand’s details more pronounced.

What you can see

Through this simple setup, you should be able to observe and identify a lot of things, such as the size, shape, texture, color, and material composition of the sand particles. For example, the texture of sand may feel soft to the touch, but may appear as coarse grains on the microscope.

In terms of size, since we are only operating at a low magnification, you can simply use a metric ruler to measure the size of the sand particles. The smallest range should be about 1 millimeter, up to around 4 millimeters.

Different types of sand also feature different shapes, some of which are round, cubic, flat, flaky, edgy, and irregularly shaped. This largely depends on what the sand is made of, and the environmental conditions that produced the sand.

ALSO READ: CAN VIRUSES BE SEEN WITH A LIGHT MICROSCOPE?

When it comes to where the sand comes from, this can either be rocks, lava, shells, or corals. Again, this affects the shape and color of the sand particles. Shells and corals are white with a bit of pink or brown.

On the other hand, minerals from rocks and volcanic materials are a bit more colorful, with quartz as a shiny white, feldspar as a bright orange, olivine as an elegant green, and both mica and hornblende appearing as black.

Take a look at this microscope image of sand particles. The uniformity of shape and size suggests constant weathering, while the wide range of colors indicate that the sand is composed of several different minerals.

What are the different types of sand?

There are, in fact, several types of sand that vary in shape, size, color, texture, and physical composition. Among these are construction sand, lake and river sand, inland sand, and beach or sea sand.

Beach or sea sand alone has a wide variety of types, depending on what materials the sand is made of, the layout of the beach and the intensity of the waves, and other environmental conditions that come into play in creating the sand.

Here are some of the most popular and common types of sand:

One type of sand that can be found on the beaches of islands that experience a lot of volcanic activity is black sand that is primarily made of basalt lava, which appears as relatively fine, dull black sand particles.

Another type of volcanic sand that covers the expanse of a few beaches around the world is green sand that is made of olivine eroded from lava cones of basalt. This mineral is what makes the sand an enchanting green.

Green sand is extremely rare, with the beaches on the island of Guam being one of the few that features this type of sand. Meanwhile, an example of black sand is on the Waianapanapa beach in Maui, Hawaii, which is produced by the combined weathering of ocean waves and high winds in the area.

Aside from volcanic material, there are other types of sea sand that are primarily made of minerals from rocks. These include magnetic sand, which is made by magnetites that make the sand denser and, well, magnetic.

One of the places you’ll find this type of sand is on a beach near San Diego, California, where the coarse sand results from huge waves washing away the finer sand particles.

Here is an image of a black beach sand that is made up of a sizable percentage of magnetite, which makes the sand a shiny, dense black. This was taken from the southwest coast of Bali, Indonesia.

In many instances, sand on the beach and sea floor is composed of broken bits of shells. These come from different mollusks and result in varying particles, such as micro molluscs or tiny snails that give off a shiny and pearly appearance. Sand made of shells is mostly white with a hint of pink and brown.

Along the Cabo beach in Baja Mexico, the sand particles are coarse, large, irregularly shaped grains due to little wave action that facilitates the erosion and deposition of materials. It’s a little better on the St. Martin beach in the Caribbean, where sand appears as flat flakes.

Meanwhile, a more intense wave action like that on the North Shore beach in Oahu, Hawaii, produces rounder, pebble like sand particles.

Sand on the sea can also be made of corals, especially in locations where there is abundant and diverse underwater life. Coral sea sand gives the appearance of rock salt under the microscope, meaning, it looks coarse, grainy, and somewhat cubic.

However, this type of sand is actually powdery white and soft to the touch, and make up some of the many popular white sand beaches, such as the Huahini beach in Tahiti, French Polynesia.

This is a beautiful magnified image of white and pink sea sand made primarily of corals and some mollusks. As you can see, the sand particles are not uniformly shaped, and you can somewhat get an idea of where each particle comes from. 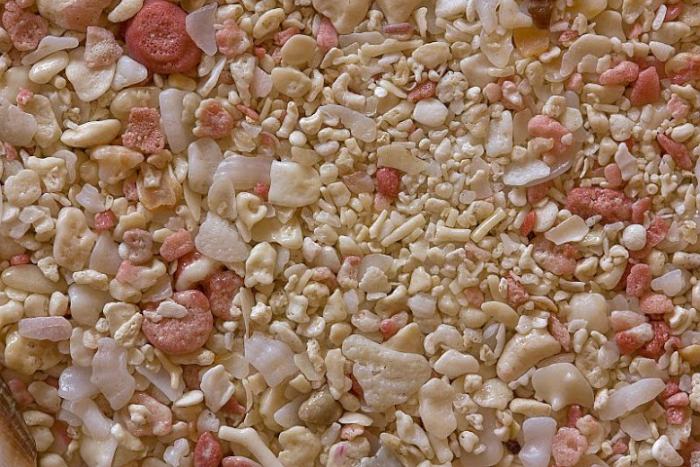 Sand from lake beaches are typically formed as the rapid rivers upstream connecting to the lake below continuously weather, erode, and decompose huge rocks along their path, before finally depositing these particles to the shallow parts of the river and lake.

For example, there is Lake Powell in Utah, where the sand on the beach is relatively fine, and appears as a combination of shiny white and orange since these are made of minerals such as feldspar and quartz.

Of course, there is also the generic construction sand, which is actually mined from mountain sides, inland dunes, beaches, and river beds. The construction sand you’ll see in many lumber yards is mostly fine grayish white sand made of quartz.

This type of sand is what’s used in manufacturing and construction, such as in concrete mixtures and sandblasting.

Observing sand through a microscope is a fun and educational activity, as the particles of sand offer a variety of surprising information, not only on how sand looks and feels like, but also on its origins and composition.

When viewing sand under a microscope, it’s best to do it by comparing different types of sand, and exploring the differences with each one.