Skip to content
Home » Blog » The Microscope’s Iris Diaphragm: What it Does And How it Works

Light microscopes are made up of several important mechanical and optical components that all work together to make it function as efficiently as possible. One of these components is the iris diaphragm.

Here is a guide on what the microscope’s iris diaphragm is, what it can do, and how it works, as well as other applications that make use of iris diaphragms.

What is a diaphragm?

A diaphragm is defined as an opaque structure with a circular opening, called aperture, at the center, which is used to control the amount of light that passes through one point to another. The diaphragm is often referred to as an aperture stop, flare stop, or field stop.

What is an iris diaphragm? 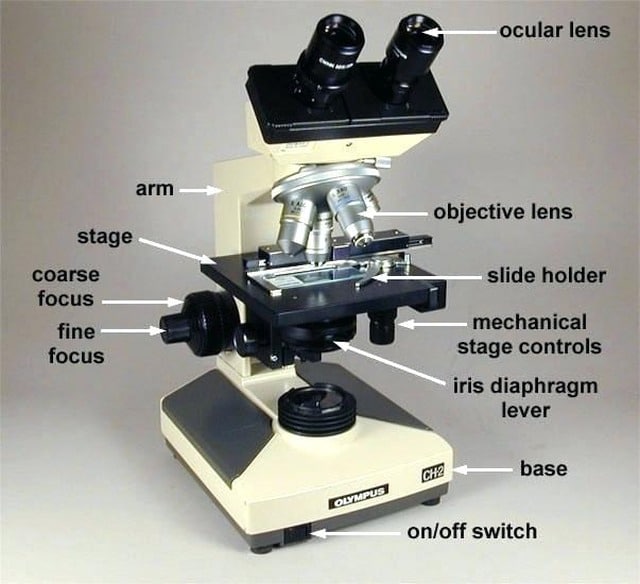 From the definition of a diaphragm, an iris diaphragm is a composite type of diaphragm with adjustable or variable opening size. The name is derived from the part of the human eye aptly called the iris, which can dilate and constrict in relation to the size of the pupil.

There are many forms of iris diaphragms, the most common (and most modern) one being a set of metal or plastic blades or leaves shaped into a circle, where controlling the blades affect the size of the aperture.

What does an iris diaphragm do?

In a microscope, an iris diaphragm is an important component that directly influences the amount of illumination, focus, and contrast of the magnified specimen image.

The main function of an iris diaphragm of a microscope is to control the amount of light that reaches the specimen. This light comes from the microscope’s light source, and is gathered by the condenser, before being regulated by the diaphragm, then passing through the specimen.

Increasing the amount of light passing through by widening the aperture of the microscope’s iris diaphragm will increase the illumination of the specimen, making for a brighter image. However, this lessens the amount of contrast on the image, since the light is not as concentrated.

Therefore, the iris diaphragm should be wide enough so that the image is not too dark, but not too wide as to wash out the details of the specimen being viewed.

To a lesser extent, the microscope’s iris diaphragm also influences how focused the specimen image is, and how much the degree of contrast is not only between the specimen and the background, but also within the specimen itself.

Iris diaphragms can be made of anywhere from two to twenty blades, with many microscope iris diaphragms consisting of five to ten blades. Curved blades make for a perfectly circular opening, while straight blades create a more polygonal shape.

The more number of blades and the rounder the opening is, the better, more focused, and higher contrast the resulting image is. As such, these iris diaphragms are more expensive, and can be found on more sophisticated devices.

How does an iris diaphragm work?

The diaphragm can be found near the bottom of the microscope, above the light source and the condenser, and below the specimen stage. This can be controlled through a mechanical lever, or with a dial fitted on the diaphragm.

The iris diaphragm only works in controlling the width of the light beam passing through to the specimen, thereby determining how much of the specimen is being illuminated.

The use of a diaphragm in controlling illumination and thereby regulating the contrast is especially important in intermediate and high magnifications of a specimen under the microscope.

This is because at higher magnification levels, less light passes through, and as such, the diaphragm needs to have a wider opening to accommodate more light.

Apart from microscopy, diaphragms have plenty of uses in a variety of other optical instruments, including cameras. As with microscopy, the basic principles of a diaphragm is the same in photography.

Interestingly, however, while the goal in microscopy is to make the image as clear as possible, photography often intentionally manipulates the diaphragm to create artful out of focus spots called Bokeh. There are even specially shaped diaphragms that are designed to achieve certain imagery effects.