Skip to content
Home » Blog » A Detailed History Of The Microscope

Microscopes are highly useful scientific devices that enable us to see small objects and organisms that are otherwise too small to see clearly, or not entirely visible to the naked eye to begin with.

The goal of being able to look at small objects clearly by making them appear larger was achieved initially with the use of a magnifying lens, then later on with a microscope. Although it’s not clear exactly when lenses were first invented and used, what is clear is that they have been an integral part of modern history.

Below is an in-depth history of the microscope, starting from its inception as a simple magnifying glass, the many key players involved throughout many centuries, up to the invention of today’s modern and sophisticated microscopes.

First, let us talk about how everything began. Understanding where the modern microscope came from necessitates understanding the very principle and idea that made inventing the microscope possible in the first place.

2000 years ago, in the 2nd century BC, the phenomenon of light refraction was first mentioned by a man named Claudius Ptolemy, who observed that water shows the illusion of an object bending to a certain degree.

Interestingly enough, the beginnings of the compound light microscope can be traced not in Europe, but in China, although most found studies come from Europe, hence the credit. Around the late 1900’s BC, there are already ancient Chinese texts that talked about magnifying lenses reported to have a much higher magnification level of microscopes today.

1st Century: The Invention of Glass

Fast forward to the 1st century AD, the Romans invented glass and studied it, resulting in a discovery that glass has the capacity to make an object appear larger than it actually is when viewed through the glass. Even Aristotle talked about this rudimentary lens.

These Romans, as well as Egyptians and Greeks, made lenses, called burning glasses or magnifiers, in the shape of a lentil bean, with thick centers and thin edges. This is in fact where the term “lens” was derived, from the Latin word “lentil”.

These lenses were also used to focus sun rays onto a flammable object such as sticks of wood in order to start a fire, hence the term burning glasses. The Greeks even used these lenses in ancient surgical procedures to cauterize wounds and lesions.

Other terms such as “magnification” came into play as many scholars and philosophers studied this phenomenon, although the more practical use of lenses was not discovered until the late 13th century to the early 14th century, when eyeglasses were made by spectacle makers in Italy by attaching lenses onto a frame.

It’s unclear exactly when spectacles were first made or by whom, but it’s safe to say that it was around the late 1200’s to the early 1300’s. At this point, lenses were being designed specifically to magnify objects such as fleas and tiny insects, and had a low magnification of around 6x to 10x. Because of this, these early magnifiers were often referred to as flea glasses.

Throughout the following decades, several more optical instruments were invented through the strategic combination of multiple lenses, including telescopes. You’ll actually find familiar names such as Roger Bacon, Thomas Digges, and Sir Isaac Newton if you care to do a bit of research. 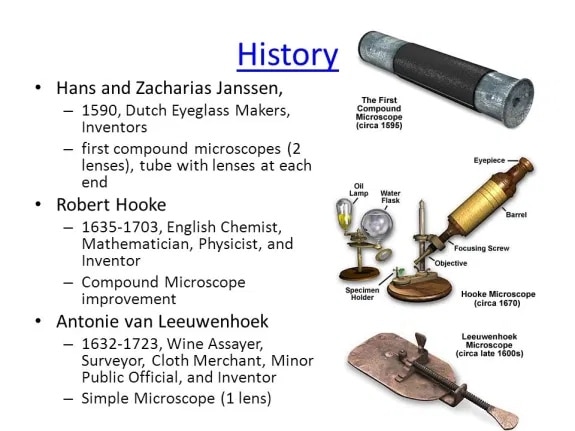 The era of renaissance ushered in several important discoveries and inventions. The year 1590 presented us with the first primitive “microscope”, which was made by attaching two lenses at opposing ends of a hollow tube, resulting in a highly magnified image with a 9x magnification.

This rudimentary compound microscope was developed by Zacharias Janssen and Hans Lipperhey, two Dutch spectacle makers. It produced a blurry image, and was more of a novelty item than a scientific tool, but it paved the way for the modern microscope.

Some sources actually credit the invention of the first microscope to Galileo Galilei, but his actual focus was studying how light interacts with lenses, which lead him to develop the telescope that he used to explore the skies.

This includes the published works of Robert Hooke who wrote the Micrographia in 1667. He is credited with the first use of a three lens system, and more importantly, the discovery of the cell, which is the basic unit of all life forms.

The term microscope, or more accurately, microscopium, was first coined in 1656. It means “an instrument for viewing what is small,” and came from the words micro (small) and skopion (means of looking), whose root word is skopien (look at).

Other related terminologies such as microscopy were reportedly coined much later.

The father of microscopy 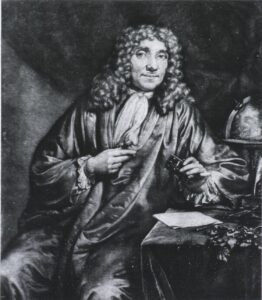 In 1675, a man by the name of  Anton van Leeuwenhoek studied the works of Robert Hooke, and found out how to increase the magnification of his lenses by polishing them and grinding them into certain shapes. He turned a glass ball into a convex lens that has a magnification of 270x, and attached it to a contraption that resembles today’s simple microscopes.

This simple, single lens, hand-held microscope is what he used to study insects and other specimens including blood cells and bacteria, which he discovered in 1674 by looking at a sample of lake water. For this, he is credited as the father of microscopy, as well as a key player in the development of the cell theory.

Roughly fifty years later, the achromatic lens was first presented by Chester Moore Hall in 1729, which greatly resolved issues in light refraction and consequent image distortion (a.k.a. chromatic aberration) that came with the use of these early magnifying lenses.

During this period, the term “microscopic” to describe the size of an object was first recorded, and the design and quality of the first microscopes have been improved in terms of visual acuity, size, and stability.

Then, in 1830, Joseph Jackson Lister addressed spherical aberration by manipulating low power lenses to achieve clear magnification, and Ernst Abbe developed a mathematical theory that explains the relationship of light wavelength with image resolution, and also pioneered the use of water and oil immersion lenses, paving the way for higher magnification microscopes.

Come the start of the 20th century, several developments and inventions related to the microscope came into light. Concepts of uniform illumination, microscopic photography, and variable magnification were introduced by scientists like Kohler, Leitz, Zeiss, and Spencer.

The ultramicroscope was invented by Richard Zsigmondy in 1903, the phase contrast microscope by Frits Xernike in 1932, and the ultraviolet microscope by August Köhler and Moritz von Rohr.

These microscopes enabled us to observe and study specimens below the normal light wavelength, as well as transparent biological materials that are difficult to view under a regular microscope.

Furthermore, more modern microscopes that did not require light at all were invented by Ernst Ruska in 1938 with the electron microscope, by Gerd Bennig and Heinrich Rohrer in 1981 with the scanning probe microscope, and by Bennig again in 1986 with the atomic force microscope, providing us with high resolution three dimensional images.

Today in the 21st century

Nowadays, microscopes of every type, classification, and specification are manufactured in various countries such as Germany, China, and Japan.

This mass production of microscopes is what made them affordable to the masses, which is why we see a lot of microscopes (usually compound light microscopes) in science classrooms and laboratories.

Microscopes have become invaluable in modern civilization, with a variety of uses across different fields and disciplines. These devices paved the way for countless scientific discoveries, and enabled us to understand and cure a variety of diseases.

The inception of the modern microscope predates a long and winding history that involves many different scientists and philosophers all over the world who spent years of researching what they know about light and magnification, and perfecting devices that can be used to see things much larger than they appear to be.

Microscopes started from a simple glass that was used to magnify common objects and start fire, before it was eventually used to make spectacles, then much later on into simple telescopes and microscopes.

Throughout several centuries, the design and quality of microscopes have since greatly improved, and now, we are able to see elements at the subatomic level.