Observing sperm cells under a microscope is another interesting experiment to conduct. Analyzing sperm can give information about the reproductive function of a male patient. Observing sperm cells is also part of a routine semen analysis and is done to identify issues with the male reproductive cells. An observer can come up with normal sperm count, motility, and morphology. But before heading towards medical complexities, let’s find out more about their structure and microscopy.

What are Sperm Cells?

Sperm cells are produced in the testicular organ of male human beings and animals. It is gametes or sex cells. Similar to female gamete or oocyte, sperm cells have 23 chromosomes resulting from a process called meiosis.

Gametes are cells involved in sexual mode or reproduction for both humans and animals; wherein there is an interaction of the sex cells.

The sperm cells typically consist of the following parts:

Before proceeding to the functions and structure of the cells, it is equally essential to understand how they are produced. The process is called spermatogenesis.

In male beings, the testosterone level in the blood is closely monitored by the hypothalamus. A dip in the hormone levels indicates low testicular activity. Thus, the hypothalamus releases the gonadotropin-releasing hormone of the GnRH.

This hormone will flow towards the pituitary gland and stimulate the production of the follicle-stimulating hormone (FSH) and the luteinizing hormone (LH).

The luteinizing hormone flows from the pituitary gland and stimulates the Leydig in the testicles to produce testosterone. On the other hand, the follicle-stimulating hormone plays a vital role in concentrating the LH in the seminiferous tubule to start the formation of the sperm.

The primary spermatocytes (haploid) are produced in the inner walls of the seminiferous tubules by a group of cells known as a spermatogonial germ. Spermatogonia, or immature sperm cells, are created through meiosis in the process of spermiogenesis. The spermatids are then formed due to second meiotic division and develop into mature male cells.

The actual process of sperm development takes around 74 days.

Spermatogenesis is made up of two distinct phases. The first (meiosis) eliminates half of the chromosomes, whereas the second (spermiogenesis) modifies size and form as the sperm mature to their standard form. 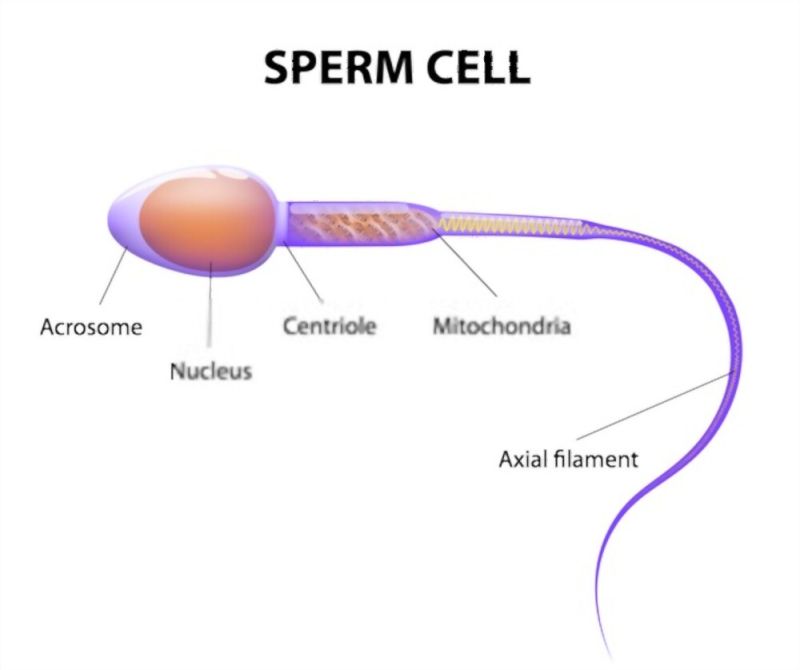 Sperm cells come in various shapes and sizes, with some having heads, bodies, and tails while others do not.

Due to various anomalies, they may vary in form and size, but other differences can be seen on any portion of the cell (head, body, tail).

The following are the physical characteristics of a normal sperm:

A sperm cell comprises three components: a head, a body (midsection), and a tail. Each part has its own set of molecules and more minor details that enable the entire sperm to function correctly.

The standard sperm head is smooth and oval. Due to the broad base and tapering apex, it has a similar appearance to an egg.

The head is the essential component because it contains the nucleus (genetic material with 23 chromosomes) needed to produce a new organism.

Aside from the nucleus, the head consists of several components.

The Acrosome and Acrosomal Cap

The acrosomal filament is a complex structure that consists of the major structural proteins termed fibrous layer proteins, intermediate filament proteins, and components of the microtubular system.

The acrosome is involved in a variety of essential processes during fertilization. For example, it is utilized in recognizing the oocyte (egg) to be fertilized with many of its associated chemicals.

The sperm cell is attracted to the egg jelly’s diffusible molecules when it comes in touch with them, causing the cell to swim towards the eggs. Chemotaxis is the ability of a cell to respond to specific chemical substances.

The cell swims towards the egg (high molecule concentration zone) and makes physical contact when it detects a high quantity. As a result of physical touch, the acrosome reaction occurs.

An acrosome reaction is an important event when the sperm comes into touch with the oocyte membrane at various locations.

Sperm contact with zona pellucida on the oocyte’s plasma membrane, for example, leads to an acrosome reaction in certain animals. It is a calcium-dependent process that causes the outer acrosome membrane to peel off. It reveals enzymes within the acrosome.

The reaction between eggshell and calcium adenosine triphosphatase results in the release of acrosin (e.g., acrosin) and proacrosin. Acrosin/proacrosin is involved in the lysis of the thick membrane that covers the ovum’s (eggs) exterior.

The enzyme is transformed into acrosin, an active form that can act on the ovum membrane when it comes into touch with the glycoproteins of the ova membrane (zona pellucida). It allows the sperm cell to enter and penetrate the egg for fertilization.

Typically known as the head’s nucleus, the haploid nucleus is found at one end of spermatozoa and contains 23 chromosomes. It is covered with an acrosome, which protects the nucleus while navigating through the female reproductive system.

The sperm cell fuses with the egg to form a zygote with 46 chromosomes. The 46 DNA in the new organism is derived from the combined gametes of both parents (egg and sperm).

The midpiece is the middle portion of the sperm cell, between the head and tail. The midpiece, like the head, accounts for roughly 10% of the overall sperm length. The midpiece contains densely packed mitochondria that supply energy for swimming.

Mitochondria are believed to have an anti-inflammatory effect and a role in programmed cell death known as apoptosis.

The centriole, located in the midpiece of the sperm cell, is involved in flagellar functions. Each centriole comprises nine sets of microtubules that form part of the cytoskeleton known as an axoneme. A bundle of microtubules (axonemal) contains a single flagellum.

The purpose of these is to allow for the movement and fusion of the pronuclear with the female genome. In addition, during cell division, the centrioles are involved in making the mitotic apparatus, which separates chromosomes and at the same time serves as the template for all future centrioles.

The sperm tail, or flagellum, is the longest part of the sperm cell and makes up roughly eighty percent of its length. The tail is composed of a single axoneme that contains microtubules. The microtubules are arranged in a spiral pattern, which provides strength and stability to the tail.

The flagellum propels the sperm cell through the female reproductive tract and into the egg. The movement of the flagellum also creates a current that draws nutrients and oxygen to the mitochondria in the midpiece, providing energy for swimming.

The tail consists of numerous components, each with its distinct purpose.

The primary and end pieces of the flagella contribute to the waveform that allows for motion. 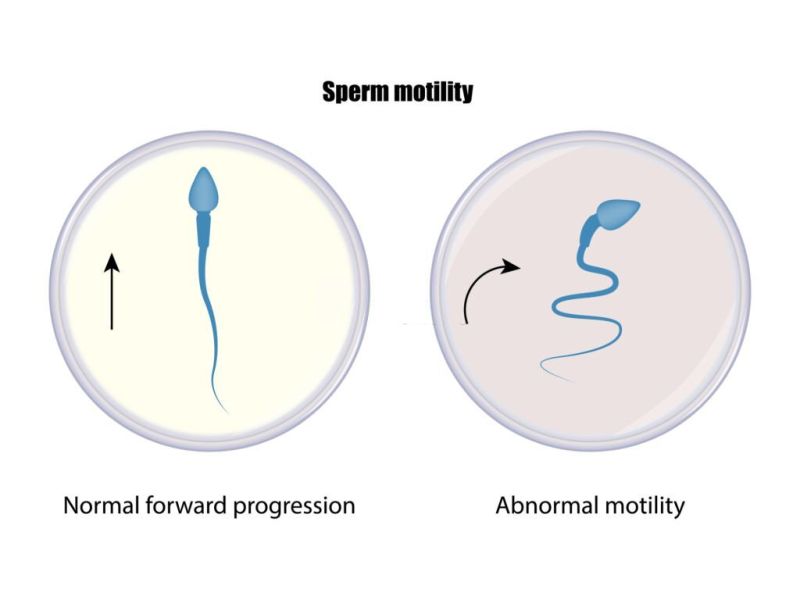 Motility is one of the main characteristics of a well-developed sperm cell. In mammals, two types of physiological motility have been identified, and they are the following:

Activated motility: This is the sort that can be found in the early phases of motility (in the epididymis and freshly ejaculated sperm). In movement, the flagella of the sperm beat gently from one side to another as the cell travels along what appears to be a straight line.

The Axoneme and the Molecular Mechanism of Motility

The tail’s axoneme is the flagellum’s core strand (flagellum). It’s a significant flagellum component and is commonly known as the motility motor. From the connecting piece of the tail to the end piece, the axoneme is made up of microtubule doublets (inner and outer axonemal dynein) and a central pair (9+2 structure).

The microtubules within the flagellum are connected via nexin bonds (nine microtubule doublets). Furthermore, they are linked to the central pair through radial spokes. These projections (radial spokes) also have the essential function of aligning the microtubules around the center pair.

Some reasons for the movement are:

The sperm cell has evolved in different mechanisms to make its way through the female reproductive system and fertilize an egg.

Here are some common adaptations noted

Microscopy of the Sperm Cell 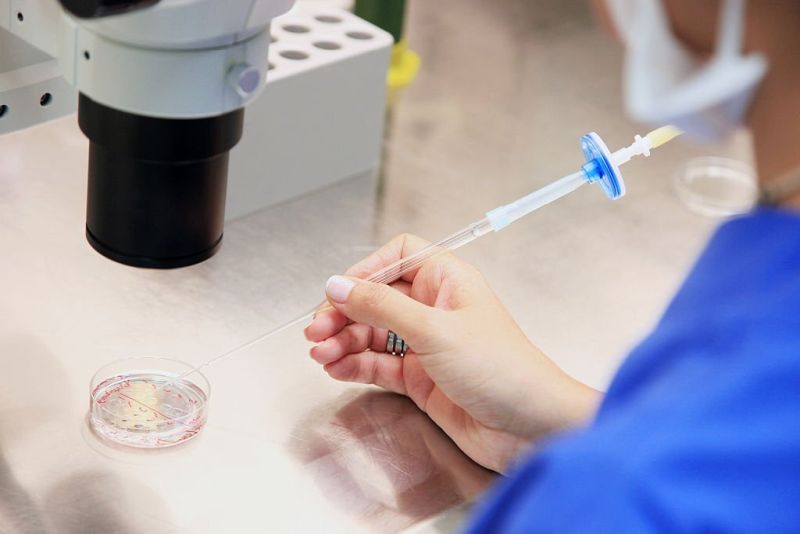 Microscopy is one of the methods utilized in the study. It is possible to observe the morphology, population, and movement of male cells with a basic wet mount procedure under a microscope.

Under a phase contrast or differential interference contrast microscope, sperm cells may be easily recognized.

The pros are that it’s less likely to harm the cells when it comes to staining. Staining allows for more significant differentiation, enabling you to look at different areas of a sperm cell compared to a wet mount (which is less harmful). However, this has the downside of destroying sperm cells.

Staining makes it easier to see all parts of the sperm cell. It is also possible to identify any irregularities in the sperm here. Sperm cells appear red, while the tail, centerpiece, and acrosome are green.

So, what is the point of learning about sperm cells? Understanding more about their function and structure can help you in understanding your reproductive health. If you’re interested in having a semen analysis done to see how well your reproductive system is functioning, it may be helpful for you to learn more about these cells under a microscope.